Academic authors are being asked to stand by an watch as the Authors Guild litigates against their wishes and interests, but supposedly on their behalf.

This hubris is not exactly unprecedented. The plaintiffs in Hansberry v. Lee 311 U.S. 32 (1940) sought to enforce a racially restrictive covenant on behalf of a broad class of landowners including African-American’s who would be harmed by enforcement and whites who simply objected. Like the land-owners in Hansberry many academic authors disagree with Authors Guild’s crusade against book digitization. The Supreme Court did not allow the plaintiffs to hijack the class in Hansberry, hopefully the Second Circuit will not allow the Authors Guild to do so in Authors Guild v. Google.

Pamela Samuelson and David Hansen (both of the University of California, Berkeley – School of Law) have filed a very important amicus brief on behalf of over 150 academic authors* in the Second Circuit Court of Appeals in Authors Guild v. Google. (Available on ssrn)

The brief in support of defendant-appellant Google argues that class certification should have been denied by the District Court because the named plaintiffs don’t represent the interests of academic authors who comprise a large proportion of the class.

The Authors Guild cloaks its lawsuit in the mantel of authorship, yet in reality it represents only a small fraction of the the class it has constructed. Most of the books that Google scanned from major research library collections were written by academics.

The basic problem is that the three individual plaintiffs who claim to be class representatives are not academics and do not share the commitment to broad access to knowledge that predominates among academics.

The plaintiffs’ request for an injunction to stop Google from making the Book Search corpus available would be harmful to academic author interests. The only way for the interests of academic authors to be vindicated in this litigation, given the positions that the plaintiffs have taken thus far, is for Google to prevail on its fair use defense and for the named plaintiffs to lose.

As we explained in the Digital Humanities Amicus Brief in the district court, “[m]ass digitization, like that employed by Google, is a key enabler of socially valuable computational and statistical research (often called “data mining” or “text mining”),”  which allows researchers to discover and use the non-copyrightable facts and ideas that are contained within the collection of copyrighted works themselves.

* I was one of the signatories.

“Standards of Proof in Civil Litigation: An Experiment from Patent Law” by David L. Schwartz (Chicago-Kent College of Law) and Christopher B. Seaman (Washington and Lee University School of Law)

I commented on this excellent paper at the 7th Annual Conference on Empirical Legal Studies Paper at Stanford yesterday (November 9, 2012). The authors ran an online experiment to try to parse out the effect of a recent U.S. Supreme Court case, Microsoft Corp. v. i4i Limited Partnership.

In i4i the Court held that a patent’s presumption of validity can only be overcome by clear and convincing evidence, but, the Court also explained that the jury should be instructed that it may be easier to satisfy this standard when the party challenging the patent’s validity offered evidence that was not previously been considered by the U.S. Patent & Trademark Office.

The experiment tested the same fact pattern on 500 respondents, assigning them into three groups. Each group was asked to apply a different standard of proof. The clear and convincing evidence standard resulted in far fewer findings of obviousness – no surprise there. But the authors main finding of interest was that a mock jury instruction directed by the i4i decision was not statistically different from the (lower) preponderance of the evidence standard explicitly rejected by the Court.

To try to understand this puzzling result, I took their data and produced some graphs to show the extent of disorder in the three experiment conditions. In the figures below, each bar is a single response. The more red on the image, the more respondents thought the patent in question was invalid due to being obvious in light of the prior art. If subjects were being consistent, all the red bars should be on the right and all black bars on the left. 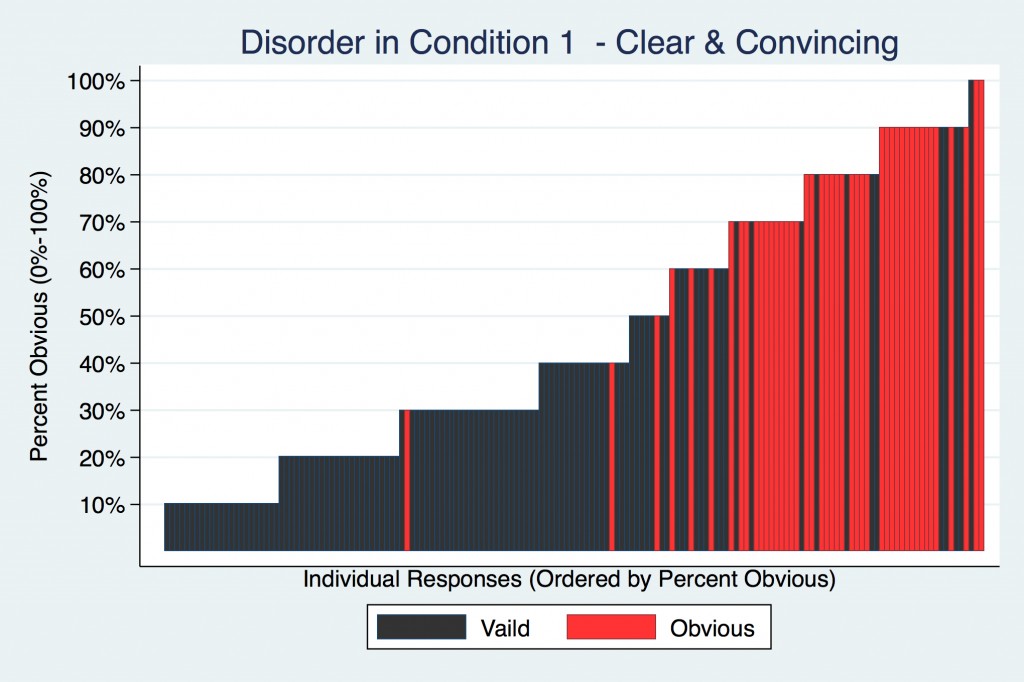 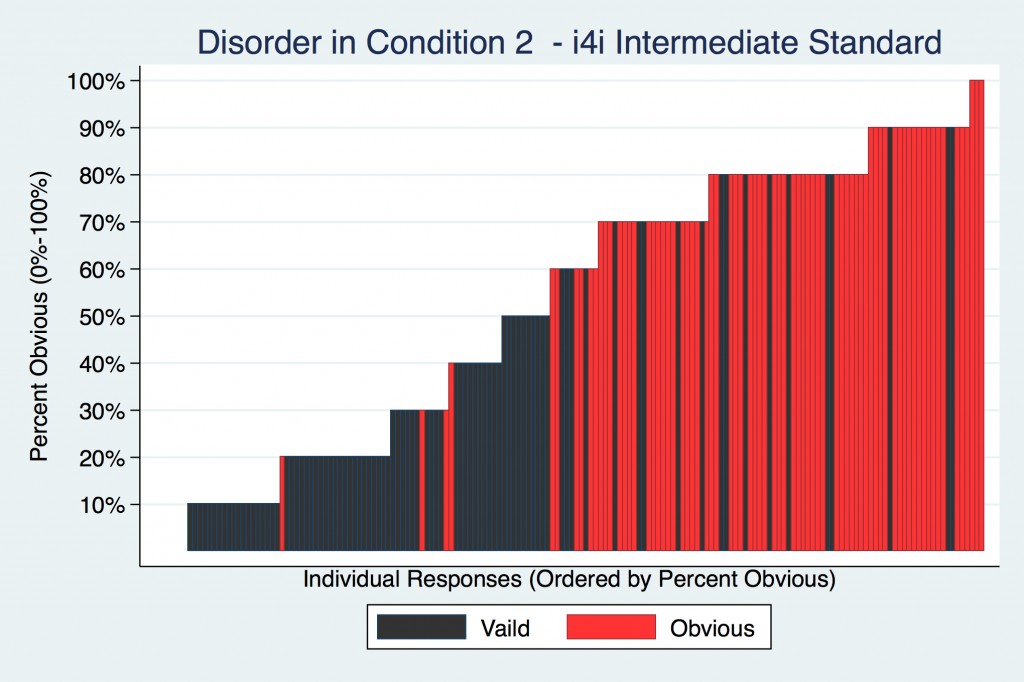 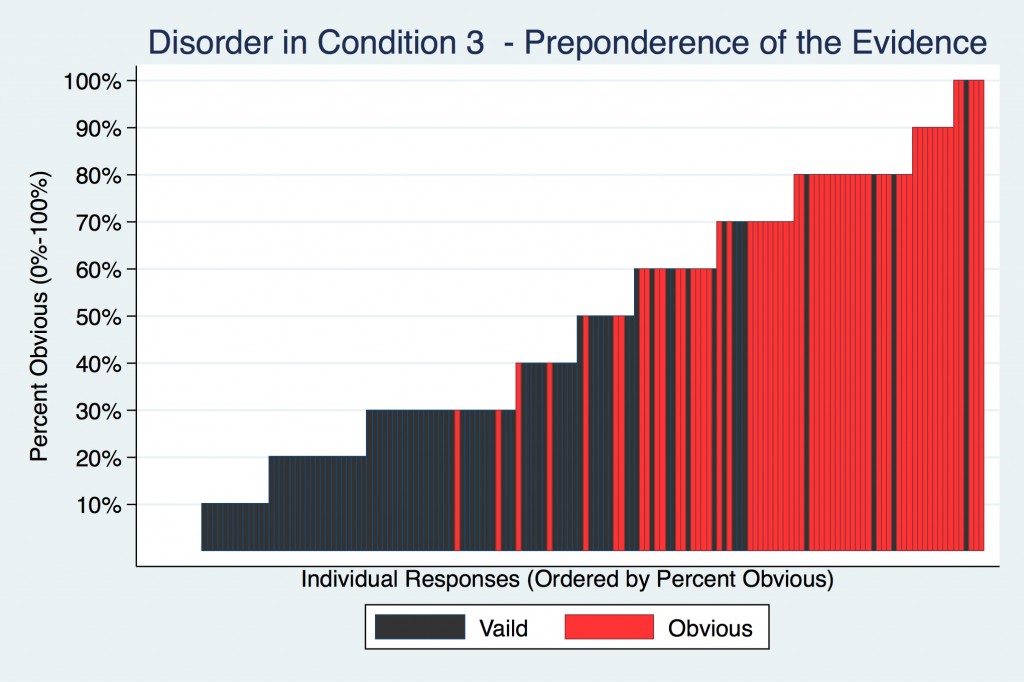 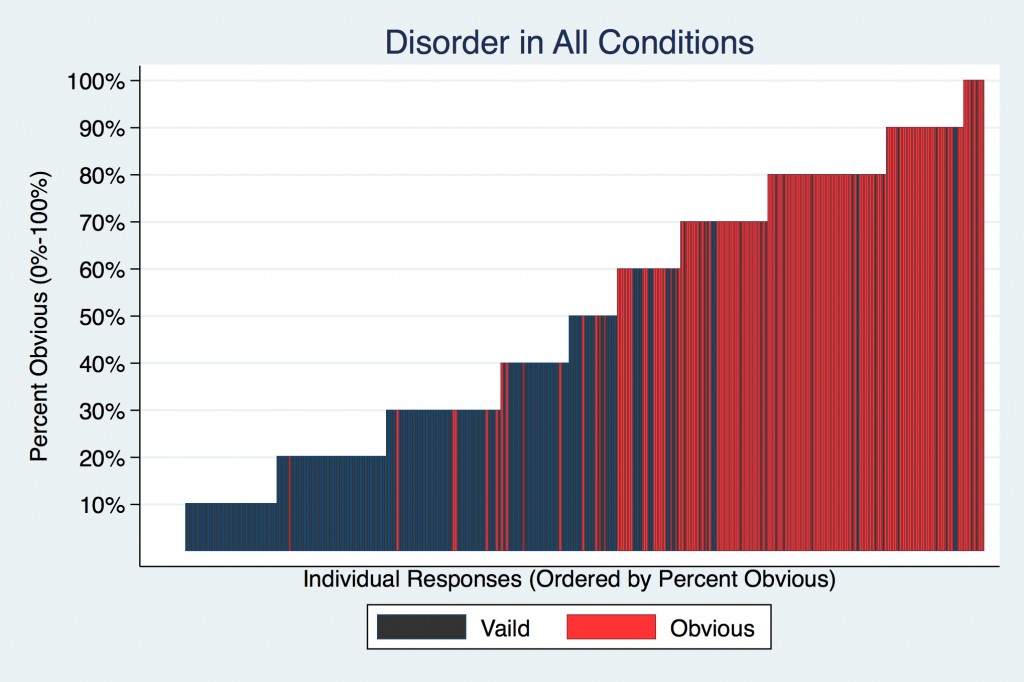 I write to express my profound dismay that Chicago is considering regulating Uber out of existence. Uber is an middleman that connects limo drivers to customers in a way that is convenient, flexible and safe. The Uber rating system keeps limo drivers on their best behavior: this benefits riders, but also the wider community because safe driving saves lives!

Chicago taxis are a disgrace to our great city. I realize that the city tries to monitor drivers but it does not have the resources to pursue anything but the gravest complaints. I walk around the city every day, either with my dog or to and from my office. Almost every day without exception I see taxis driving unsafely  — running lights, not yielding to pedestrians before turning, straddling lanes, changing lanes without indicating, stopping abruptly, etc.

The mission of the BACP is to ensures a fair and vibrant market place for both businesses and consumers. Your mission is not to simply protect incumbent taxi companies from competition. If Uber is a threat, it is a threat to raise standards! One of the great things about Uber is that it empowers the passenger to monitor the driver’s performance. Drivers know this and in my experience, they lift their game accordingly. Uber is efficient. Uber is good for drivers. Uber empowers consumers. Uber saves lives. Please don’t make the mistake of protecting the status quo at the expense of consumers and competition.

Matthew Sag
(in my personal capacity)

Associate Professor, Loyola University Chicago School of Law
Associate Director for Intellectual Property of the Institute for Consumer Antitrust Studies
Download my research at http://ssrn.com/author=461043
Follow my tweets at http://twitter.com/matthewsag
My website is www.matthewsag.com