Let me know if this post came up in your rss feed.

Why should you care?

This ban is aimed at keeping the Tesla electric car out of New Jersey, but this effects you even if you have no interest in an electric car. State laws protecting car dealerships add thousands of dollars to the cost of every new car.  NPR’s Planet Money program has an excellent summary of this issue.

As the letter notes:

… the regulations in question are motivated by economic protectionism that favors dealers at the expense of consumers and innovative technologies. It is discouraging to see this ban being used to block a company that is bringing dynamic and environmentally friendly products to market.

Among the letter’s signatories are some of the country’s most prominent legal scholars and economists from across the political spectrum.

Read Geoffrey Manne‘s post on Truth On The Market

The following are a few of the new figures from the paper. The new data is discussed in the article.

John Doe lawsuits as a percentage of all copyright lawsuits 2010–2013, by State 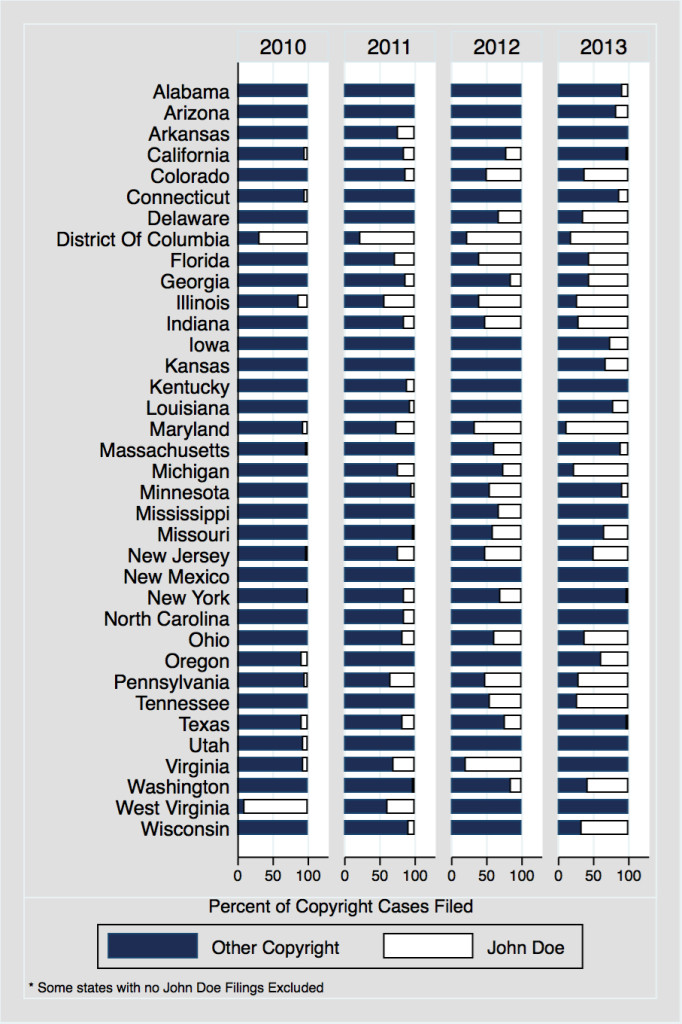 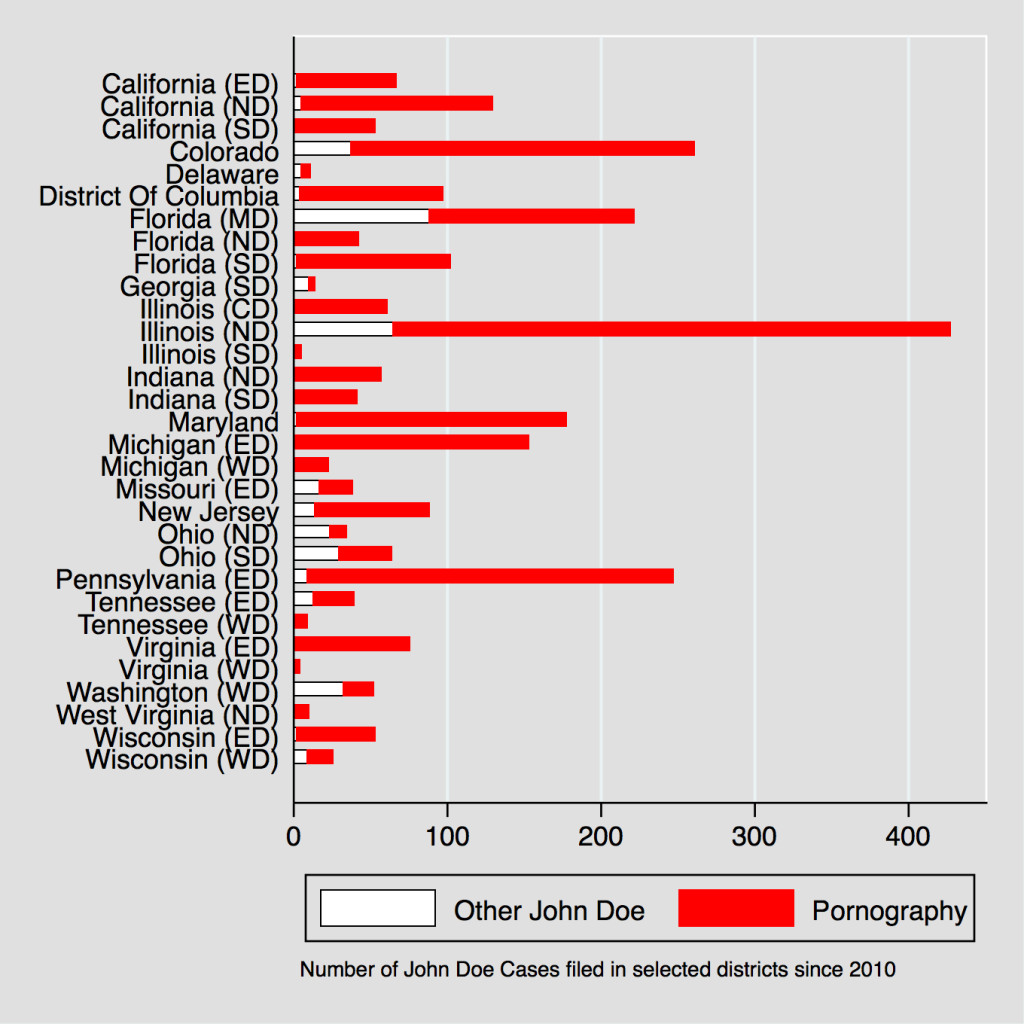 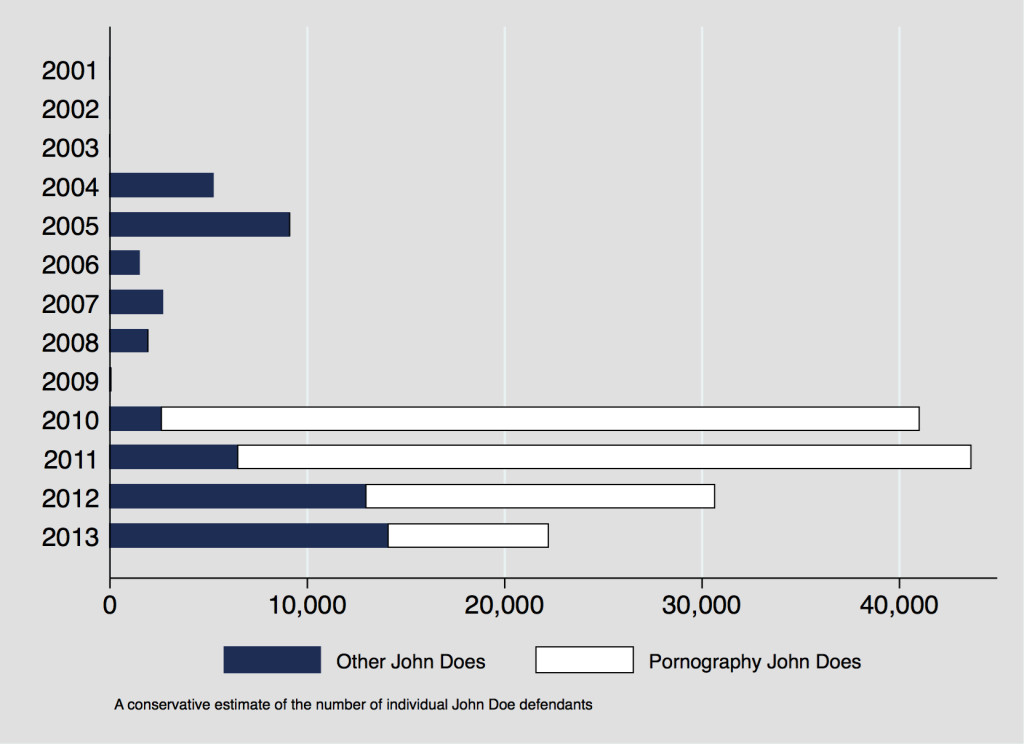 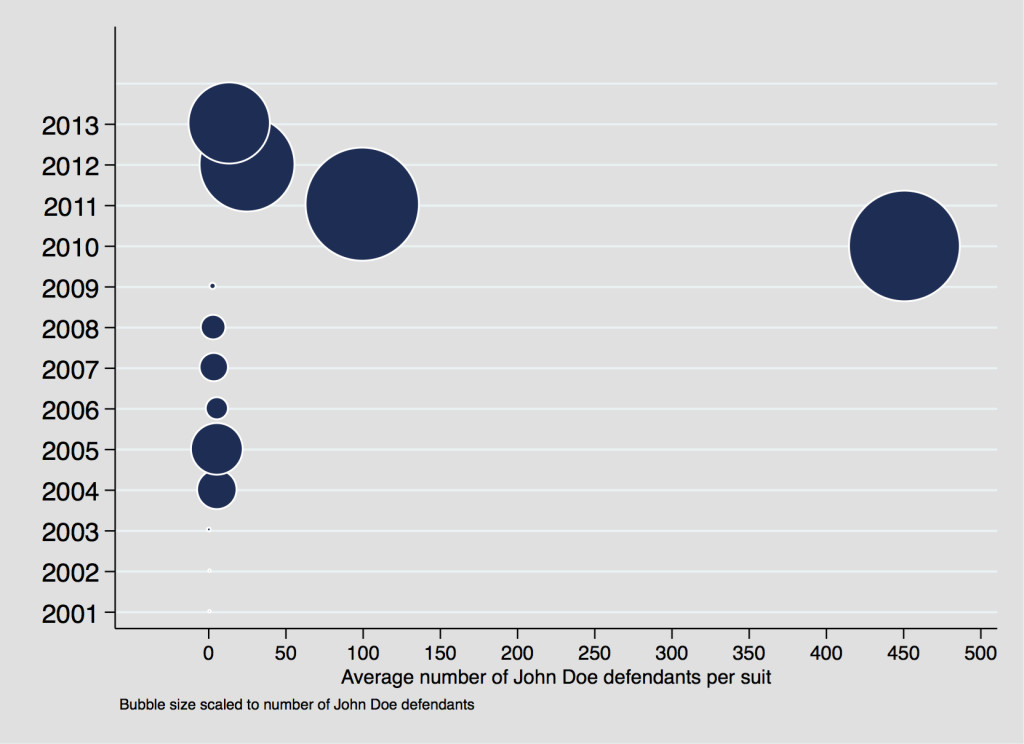 A preview of the data. 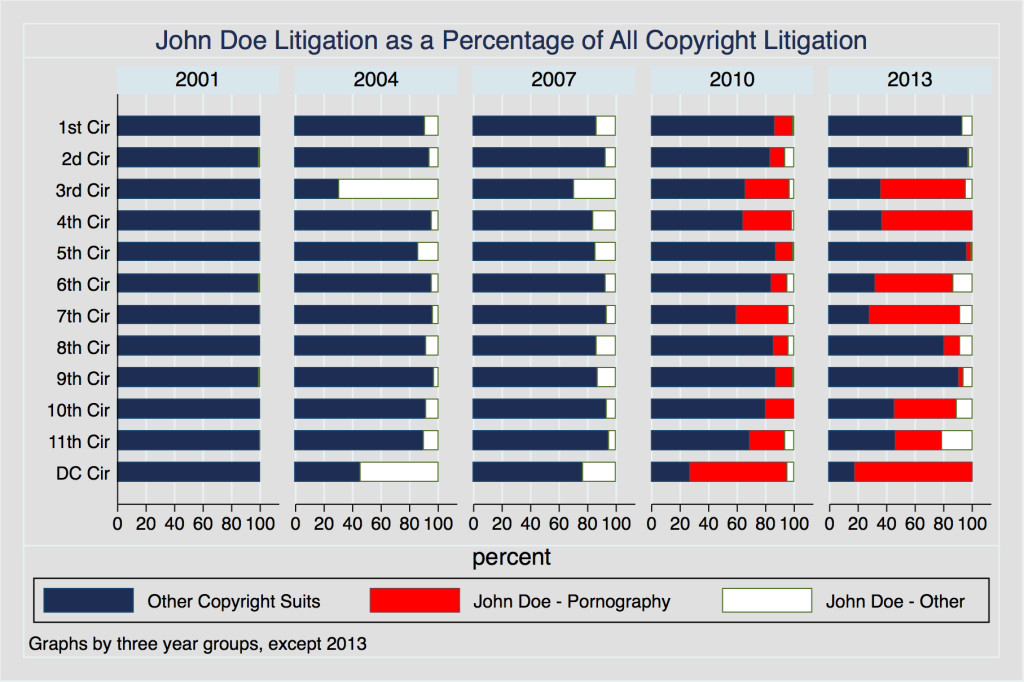 For more details see Copyright Trolling, An Empirical Study (this is still the version posted last week, a new version with additional data will be out soon).

American Broadcasting Companies, Inc. v. Aereo, Inc., is a case scheduled for oral argument before the Supreme Court next month. The case gives us an interesting opportunity to reassess the oft-stated aim that copyright law should be technologically neutral.

Aereo offers consumers the ability to watch live free-to-air broadcast television via the Internet with the ability to pause, rewind and fast-forward programming. Aereo provides this service by receiving free-to-air broadcast television on a vast array of micro-antennae, each antenna being dedicated to an individual subscriber. The signals so received are reduced to individual copies of individual programs. These copies are then transmitted to individual subscribers, either virtually live or at some later time. See WNET, THIRTEEN v. Aereo, Inc., 712 F. 3d 676, 680-683 (2d Cir. 2013).

Judge Chin’s dissenting opinion takes an effect-based perspective and argues that regardless of how the Aereo system actually works:

Aereo’s “technology platform” is, however, a sham. The system … is a Rube Goldberg-like contrivance, over-engineered in an attempt to avoid the reach of the Copyright Act and to take advantage of a perceived loophole in the law.

The Copyright Act aims for neutrality in that the public performance right in 17 U.S.C. § 106(4) is defined to include the right “to transmit or otherwise communicate a performance… to the public, by means of any device or process.” Id. § 101. But the problem with Chin’s dissent is that the “by means of any device or process” language does not mean that non-public transmissions are rendered into public transmissions simply because they have the same effect as technology we recognize as implicating the public performance right.

An effect-based vision of technological neutrality flatly contradicts the basic structure of rights under the Copyright Act. The Copyright Act defines the rights of copyright owners with respect to six particular acts–thus, for example, reproducing a copyrighted novel without permission or justification is infringement, reading a copyrighted novel is not. 17 U.S.C. §106(1)-(6).

There are many reasons why we should not disregard the technical details of a system like Aereo’s, but perhaps the most important one is simply that transforming effects into functions is not necessary. Aereo has indeed designed its system to avoid making public performances, but it has done this by adding thousands of individual copies. We should not feel the need to label every performance from a copy as a public performance given that the copyright owner also has an exclusive right to reproduce the work in copies.

This post is a reaction to Brad Greenberg’s presentation on the issue of technological neutrality in copyright at the Fourth Internet Law Scholars Work-in-Progress Symposium.

The fourth annual work-in-progress symposium for internet law scholarship  will be held at the Institute for Information Law and Policy at New York Law School on Saturday March 8, 2014 at .

The work-in-progress event was created for internet law scholars to receive feedback about their papers and projects from their academic peers.  This year some of the nation’s  leading internet law academics will convened at New York Law School to present serious papers under the following whimsical headings: