Skip to content
There are many amazing charities worthy of your support — the American Cancer Society is one of them. I am raising money for the ACS again this year because I believe in their mission and I think they do a great job.
Cancer research is saving lives and making lives better every single day. My Chicago Marathon race will help save lives and I’m hoping you’ll support me in my efforts.More than 11 million Americans who have a history of cancer will celebrate another birthday this year. My uncle Ivan Sag died of cancer last year. Ivan was a powerful intellect, a leader in his academic field, a music lover and a party animal. We miss him.Please support me with a donation so that together, with the ACS, we can help save lives and create a world with less cancer and more birthdays.

Last year I ran the Chicago Marathon in 3:44:48 and raised over $2,000 — please help me run even faster and do even more to support this great cause this year.

Every donation of $13.1 (50 cents per mile) or more entitles you to nominate one song* for my Marathon playlist. Try to think of something awesome, that I might not have considered. I will be listening and think of you during the race and during my many many miles of training runs.

You can donate by following this DONATIONS link.

Thanks for your support!

* Songs longer than 7 minutes and 30 seconds, songs featuring Katie Perry, country music, opera or that are otherwise unbearable will be included solely at the runner’s discretion.

The Marathon Playlist so far:

There were 2004 copyright lawsuits filed in federal district courts in the United States in the period from January 1st to June 30th 2014. Just under 48% of these suits were filed by copyright owners against anonymous IP addresses accused of copyright infringement online. This is not surprising given the extent of online piracy, but what is more than a little surprising is that almost all of these lawsuits relate to pornographic films. Lawsuits alleging illegal file sharing of pornography were virtually non-existent before 2010, they now (Jan-Jun 2014) account for than 41% of all copyright suits filed. 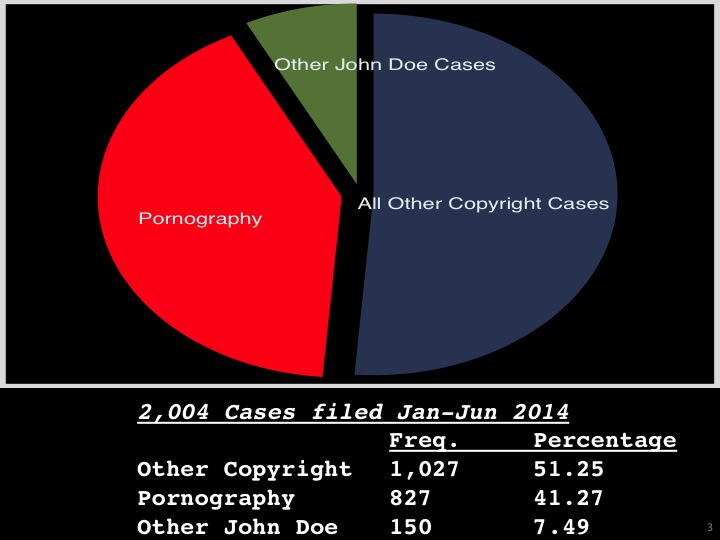 In my talk tomorrow at the 14th Annual Intellectual Property Scholars Conference at Berkeley Law School I will address this phenomenon and answer three fundamental questions: (1) When did this happen? (2) How did it happen? and (3) Is now the time to panic?

Here are some of the slides from my talk (below), the full paper is available here (download    Copyright Trolling, An Empirical Study) 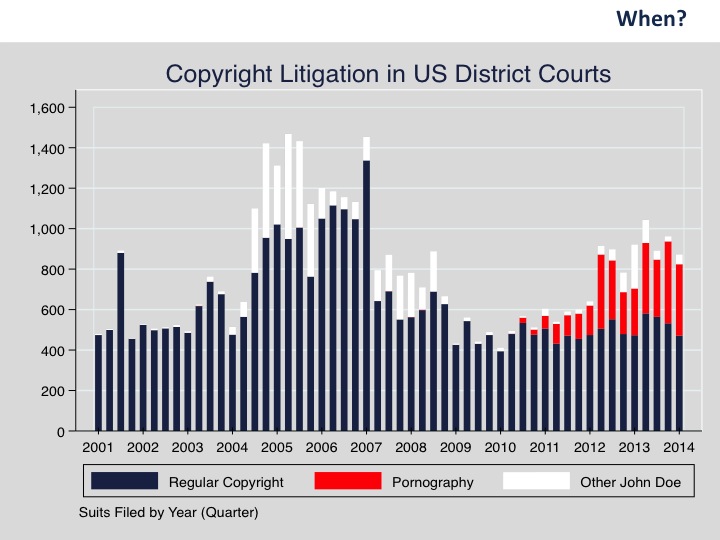 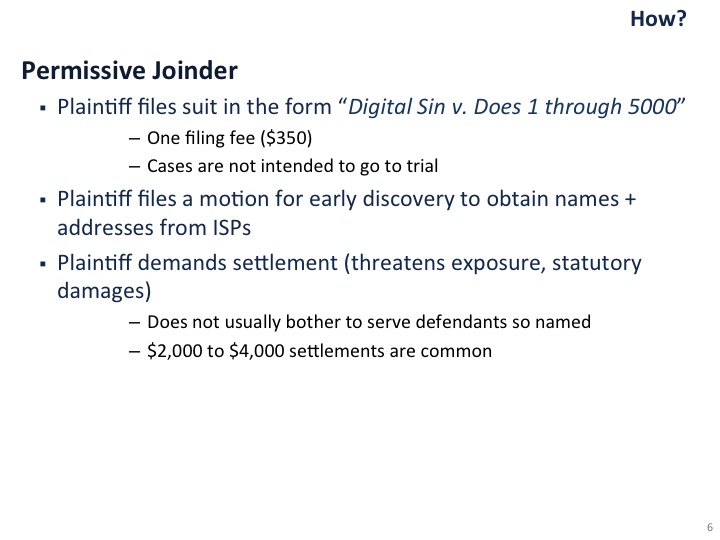 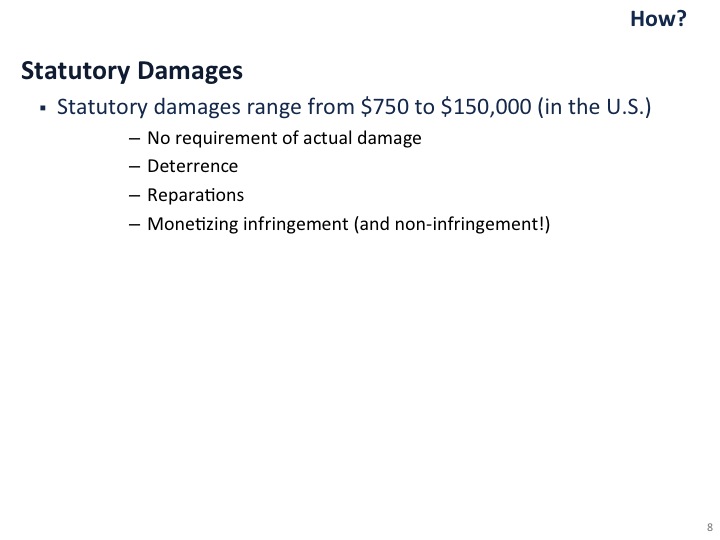 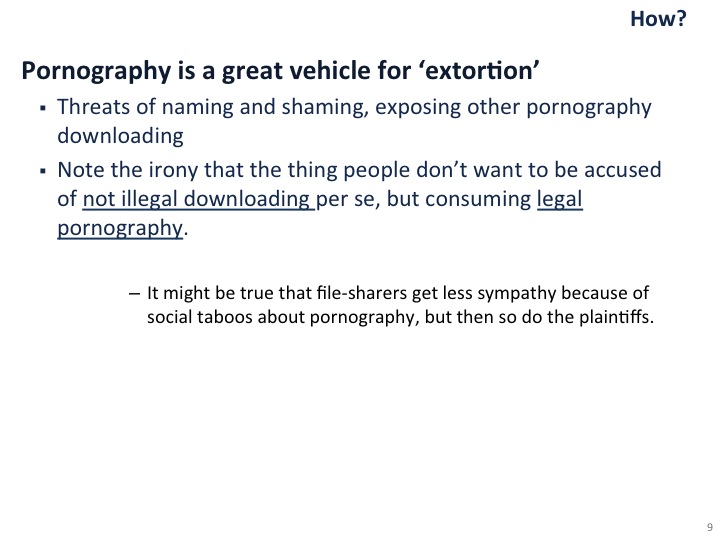 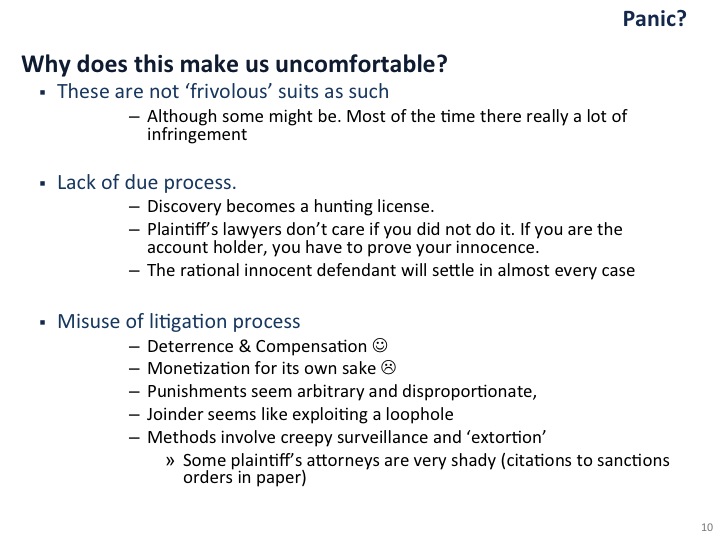 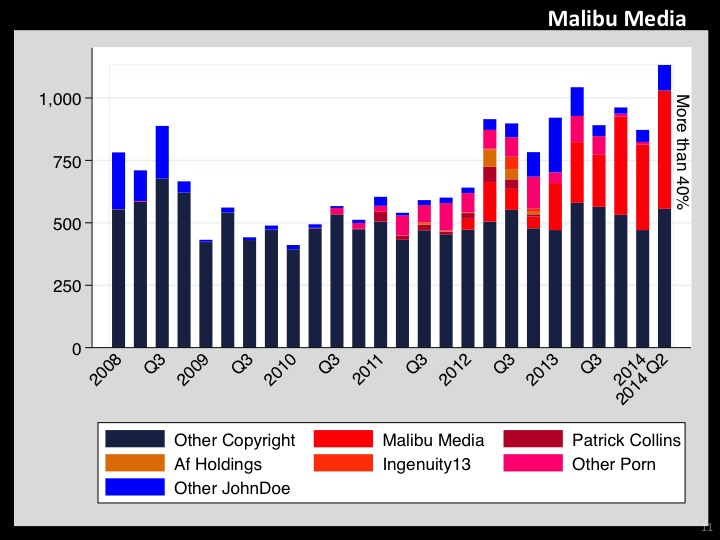 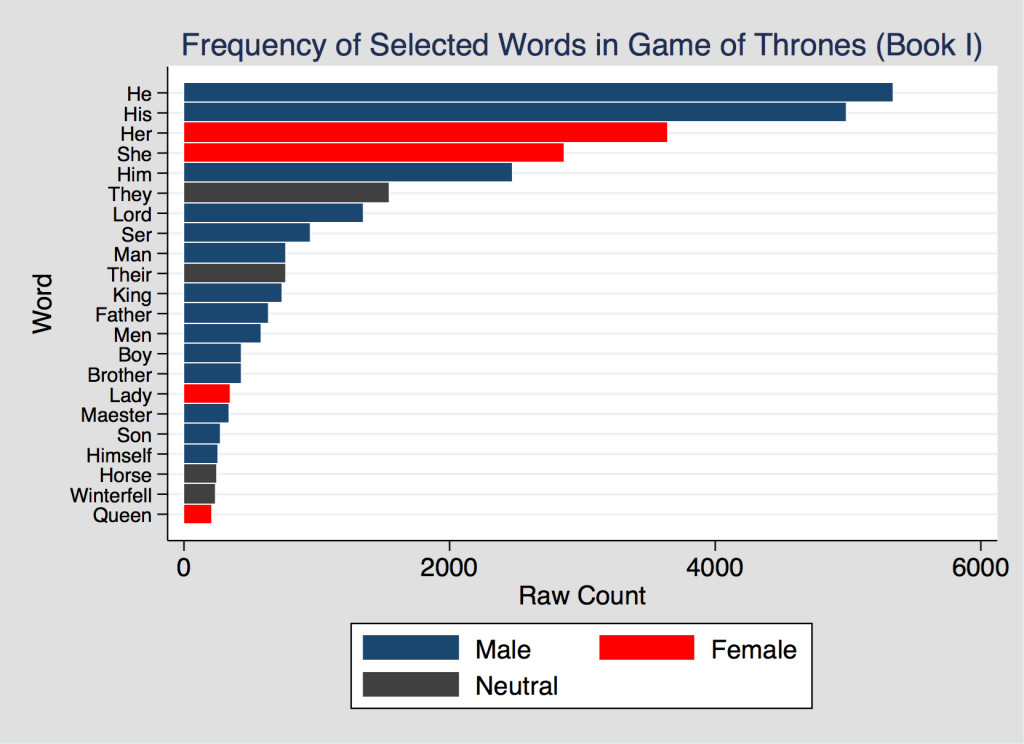