Fair use is often criticized as unpredictable and doctrinally incoherent – a conclusion which necessarily implies that the copyright system is fundamentally broken. This article confronts that critique by systematically assessing the predictability of fair use outcomes in litigation. Concentrating on characteristics of the contested use that would be apparent to litigants pre-trial, this study tests a number of doctrinal assumptions, claims and intuitions that have not, until now, been subject to empirical scrutiny.

This article presents new empirical evidence for the significance of transformative use in determining the outcomes of fair use cases. It also substantially undermines conceptions of the doctrine that are hostile to fair use claims by commercial entities and that would restrict limit the application of fair use as a subsidy or a redistributive tool favoring the politically and economically disadvantaged. Based on the available evidence, the fair use doctrine is more rational and consistent than is commonly assumed.

The key findings are summarized in figure 3 from the paper 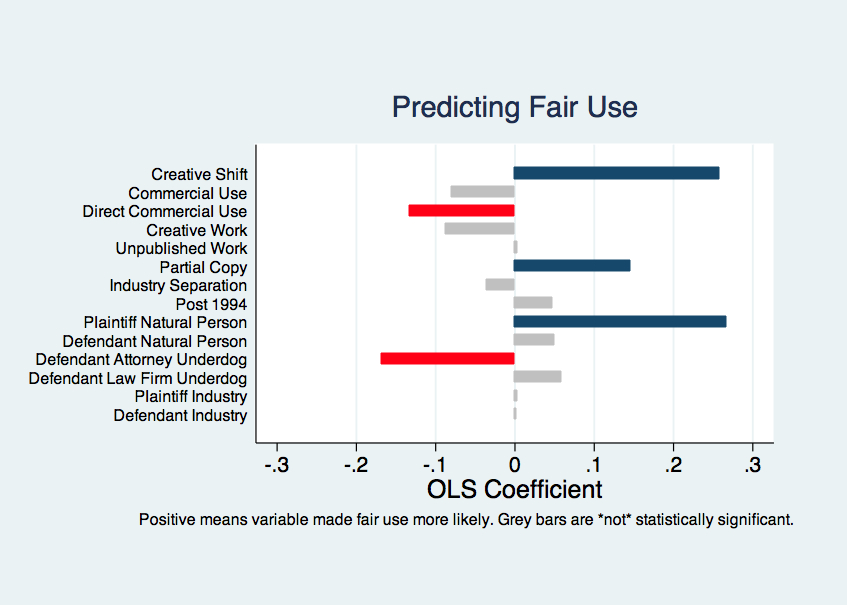 As summarized in the conclusion …

“the evidence from litigated cases analyzed in this Article confirms the centrality of transformative use.  A transformative work is one that imbues the original “with a further purpose or different character, altering the first with new expression, meaning, or message.”  Measured in terms of the variable Creativity Shift,  it appears that transformative use by the defendant is a robust predictor of a finding of fair use.”

“the results … also confirm the significance of the statutory factor that addresses “the amount and substantiality” of the defendant’s unauthorized use of the plaintiff’s work.  Although the effect is not as large as was transformative use, there is clear evidence confirming that partial copying weighs in favor of the defendant’s assertion of fair use. At a practical level, this reinforces the wisdom of minimizing the extent of unauthorized use when relying on the fair use defense. However, it is also apparent from the data that there are many strong cases of fair use involving copying the entirety of the plaintiff’s work. Technologies that rely on digital processing of entire copyrighted works, such as Internet search engines and plagiarism detection software, nonetheless present a very strong case for fair use.”

“there is no evidence that commercial use (in contrast to direct commercial use) reduces the defendant’s chance of maintaining a fair use defense. As noted in Part II, the presumption against commercial use expressed in dicta in the Supreme Court’s Sony decision is difficult to reconcile with private commercial incentives copyright is designed to produce. Ten years later, this presumption was implicitly rejected by the Court in Campbell.  The evidence contained in this study indicates no anticommercial bias in fair use. There are sound doctrinal reasons for unequivocally discarding the Sony presumption and the evidence suggests that a majority of district courts have in fact already done so.  Commercial/noncommercial simply does not appear to capture any meaningful distinction in litigated fair use cases.”

Some other interesting figures from the paper:

Cumulative Predicted Probability of a Fair Use Win 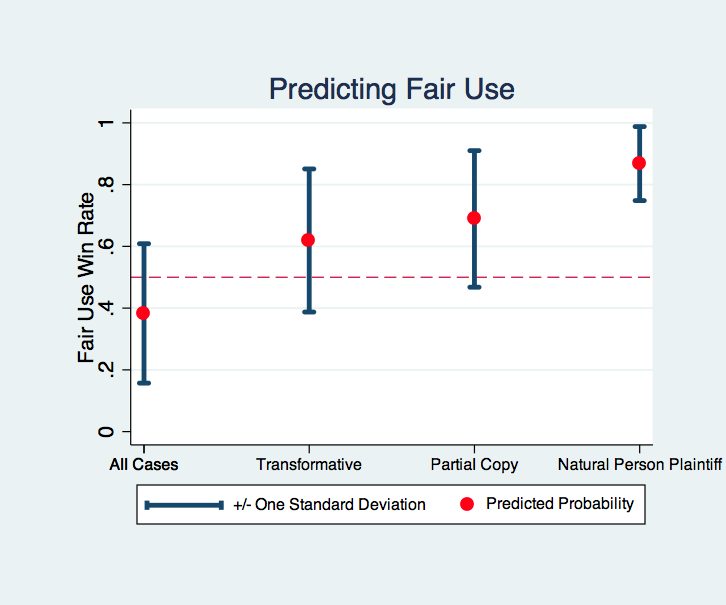 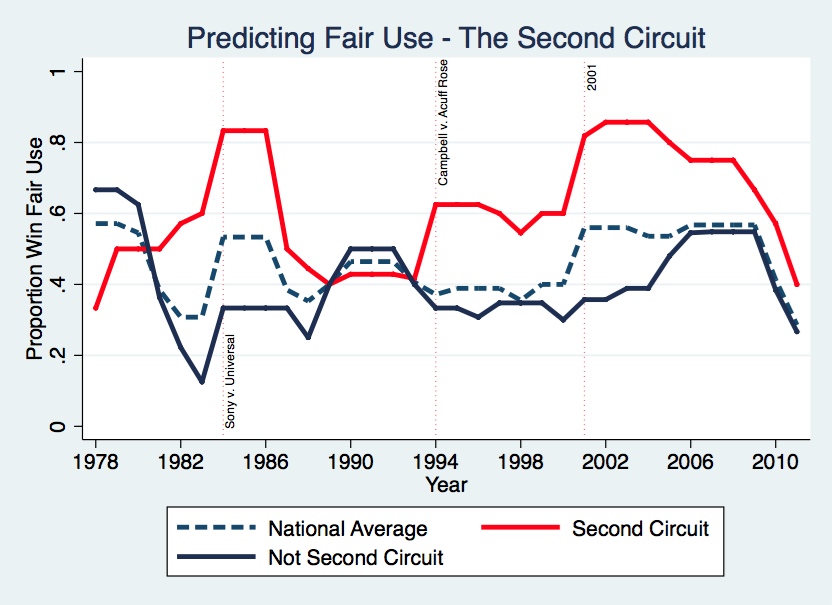 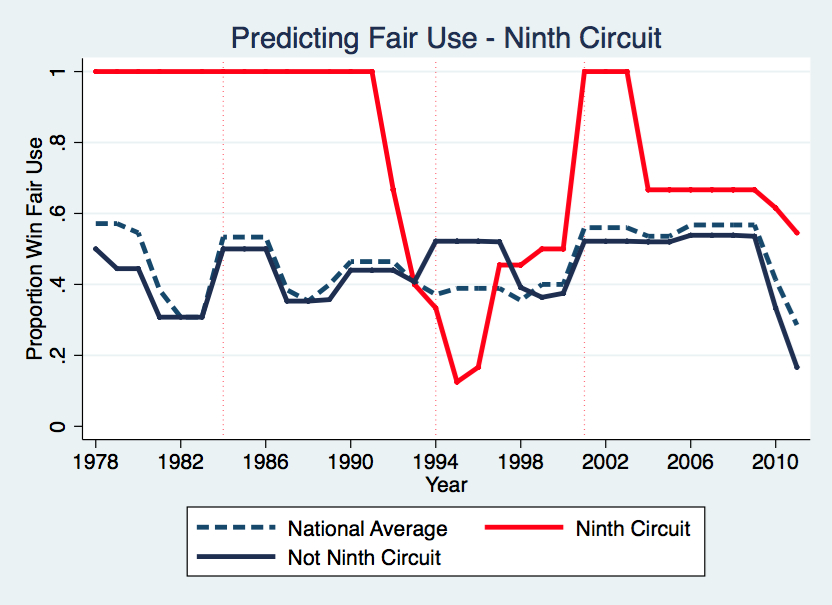 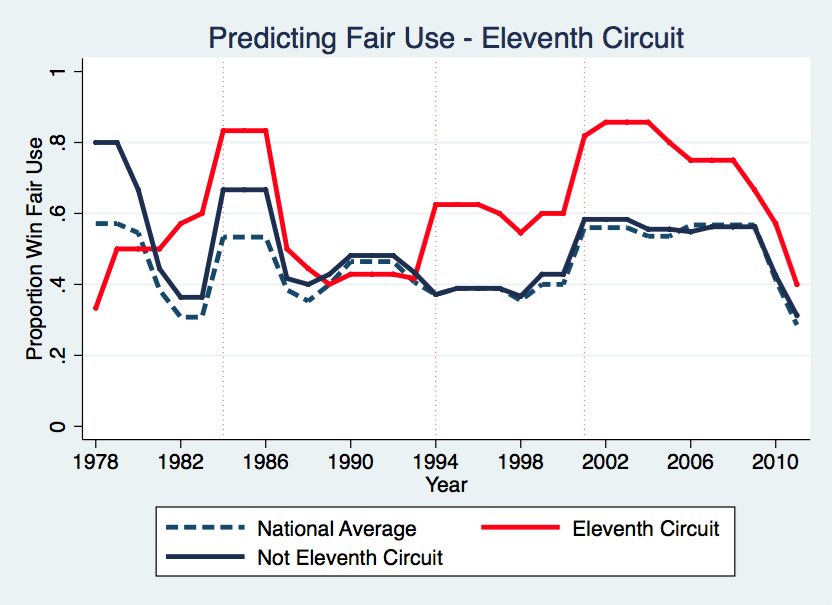