This post is a recap and extension on my post about eBay from a couple of days ago. I have learned a lot since that post, much of it from comments and emails. Thanks to everyone who provided helpful information!

The Brick scam works as follows: overseas criminals use remail services to disguise their identities and pretend to be residing in the United States. These criminals buy valuable or easily tradable items such as an Apple iPhone on eBay auctions, falsely claim that the item is damaged or wrongly described, insist on returning the item, but instead return something else entirely worthless. Sometimes it is a brick–thus the name–in my case it was a worthless Samsung phone from last century. 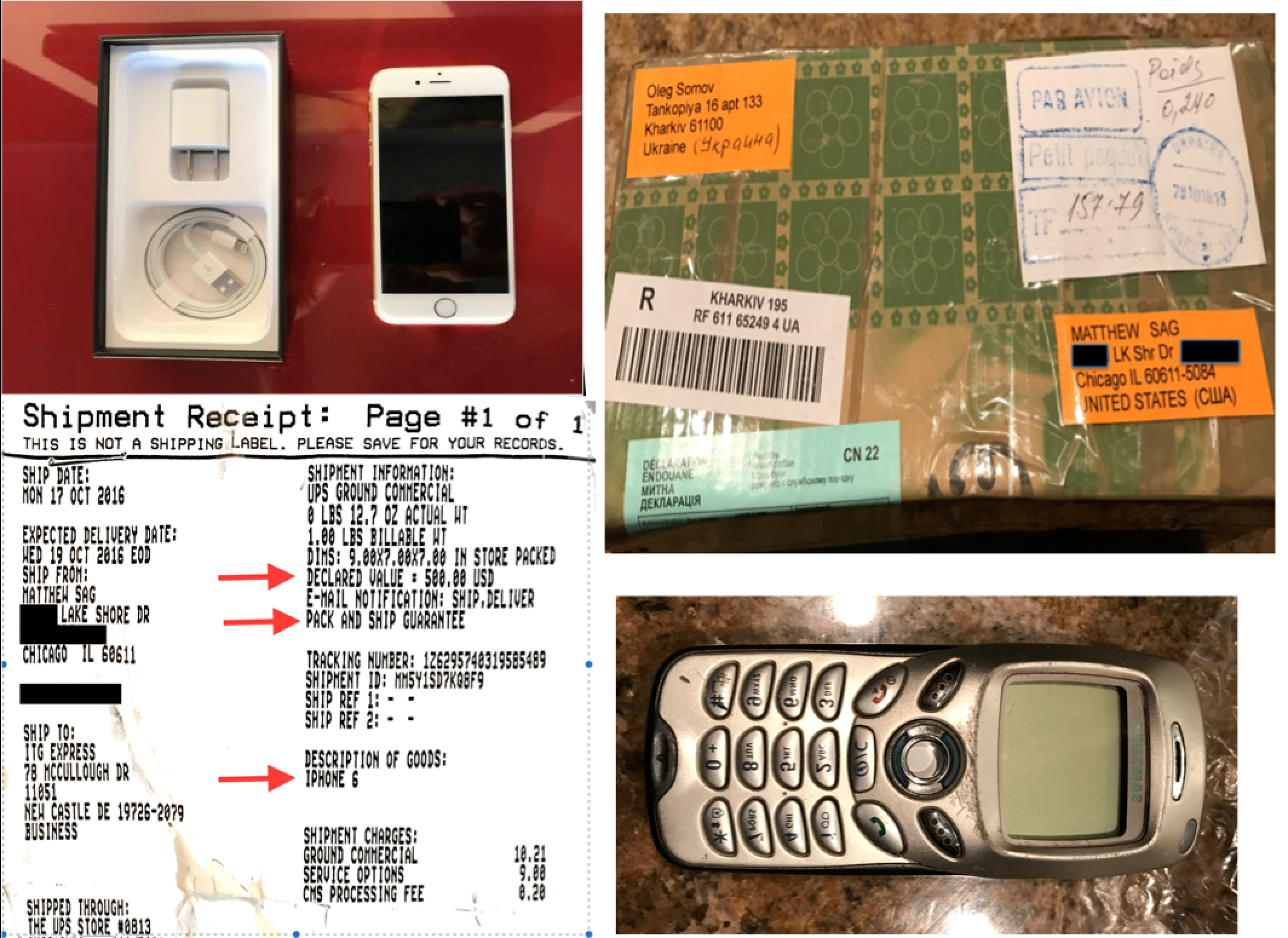 Why does the Brick Scam work?

eBay recently instituted a “Buyer Protection Program” which essentially compels eBay sellers to accept returns regardless of whether they have indicated a willingness to do so or not. This practice is deceptive .

eBay’s “Buyer Protection Program” resolves disputes between buyers and sellers in favor of the buyer by default, essentially unless the buyer admits dishonesty. In effect, there is no way for the seller to prove that buyer sent back a brick rather than an iPhone. The criminal thus obtains a refund from eBay and gets to keep the item as well.

Although the immediate cause of this problem is fraudulent buyers, eBay plays a significant role. Sellers on eBay are induced into a vulnerable position by eBay’s misleading practices and the fraud is made possible by eBay’s “Buyer Protection Program” enforced on sellers as a contract of adhesion.

This is what happened to me

In October sold a very slightly used iPhone 6S on eBay, received payment and promptly shipped the phone. The buyer waited a few days after receiving my iPhone and then contrived a disagreement claiming that the phone was damaged and not as described. Although I did not agree to accept returns when I listed the item, in part to protect myself against unscrupulous buyers, I soon learned that eBay forces you to accept returns.

On November 14, 2016, I received this package from the Ukraine with a customs declaration describing the contents as “phone used”. Occasionally you might read the description “suspicious looking package” in the media wondered what exactly makes a package look suspicious? It looks like this: 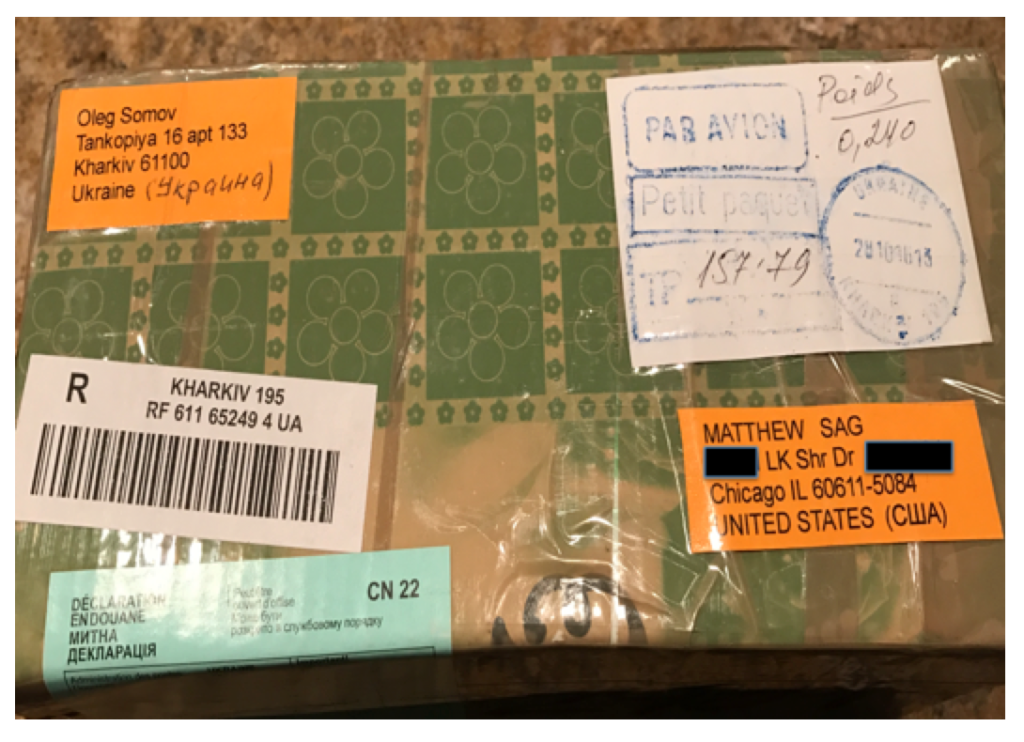 Given that I had shipped the iPhone to an address in Delaware and that my address on Lake Shore Drive in Chicago was written as “LK Shr Dr” I was immediately suspicious. I took photos as I unboxed the packaged and I did so in the presence of a witness. The phone that I received to replace my mint condition gold iPhone was a beaten up old Samsung. I didn’t even know Samsung made phones like this – it looks almost exactly like an old Nokia that I had in 2002.

I thought I was dealing with a verified buyer in the US because that is what eBay and PayPal told me and I don’t accept international bids (to protect myself from fraud!). I now realize that the buyer’s address was just a box at a remail service, Ukraine Express.

Ukraine Express’s address comes up with a number of fraud related posts when you type it into Google.

The buyer in this story trades on eBay under the name “plasmacompany” and claims to be Dmitriy Dubogray, doing business as ITG EXPRESS, 78 McCullough Dr # 11051, New Castle, DE 19726-2079. But according to PayPal, the buyer is Vadim Grebenyk ‏(Vadex1960@gmail.com). 78 McCullough Dr., New Castle DE 19726 is the office of Ukraine Express, a remailer. Ukraine Express may be ignorant of  the fraudulent transactions that pass through its doors. Maybe?

I tried to raise all this with eBay. I explained that the buyer had returned a worthless 10-year-old phone in exchange for the mint condition iPhone 6 I had sold. I offered to provide pictures.

I didn’t know about the Brick Scam when this happened. I did not know about remail services either. But eBay surely knows about such things! So I still can’t understand why when I told eBay that received a worthless peice of plastic for my $465 iPhone from the Ukraine, and they could see by the USPS tracking number (RF611652494UA) that I was right, why they would side with the buyer over me.

On November 25, eBay “resolved” this case in favor of the buyer with the following explanation. “The item has been delivered to you. eBay Customer Service is refunding the buyer and debiting your PayPal account for reimbursement. We understand how frustrating it is that the items condition changed but, unfortunately, we didn’t receive proof that the buyer caused the issue.”

Really? Could they possibly realize how frustrating this is? 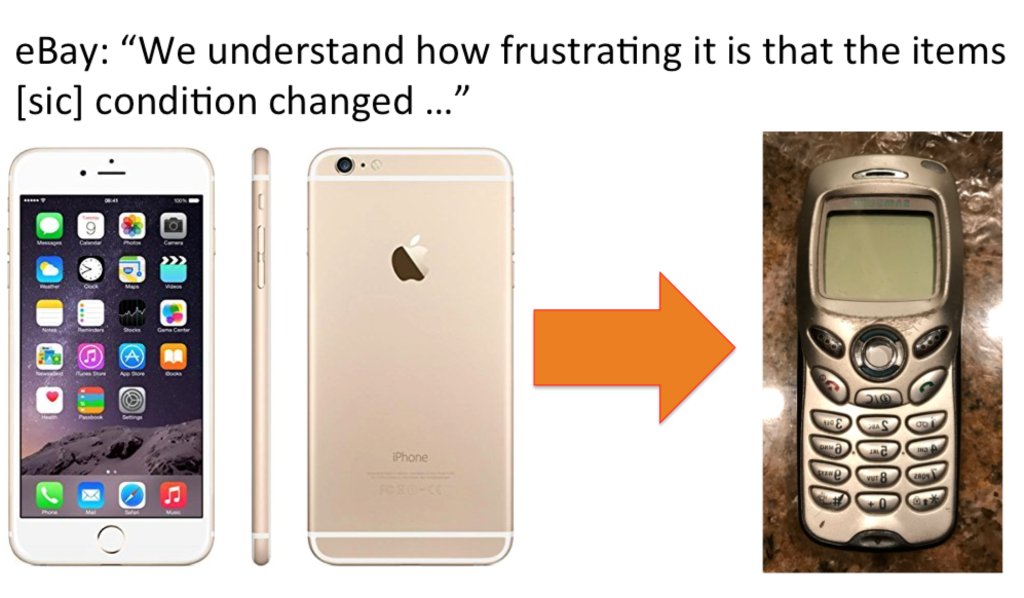 In addition to this galling faux-sympathy, what this note does not explain is that eBay never gave me any opportunity to submit any proof of buyer fraud.

To cut a long story just a bit shorter, on November 26, 2016, I attempted to appeal this decision. I was not successful. eBay sent me several messages demanding payment and eventually extracted $424 from my PayPal account despite my protests.

A couple of days ago I posted about this experience . The post attracted some attention on twitter and was reposted to Ycombinator’s Hacker News forum. The comments on that site were illuminating as were many posts on twitter and several direct emails. Thanks!

From these comments I learned about the Brick Scam.

“As in ‘you can’t sell apple stuff on ebay anymore because of the brick scam’. Usually, they send you a return package with a rock or brick inside approximating the weight of the original package. Its famous enough at this point that its impossible that ebay is unaware. They are fully aware and are choosing to continue to profit off of this. So much so that the “shell game” the author faced is likely scripted by this point.” Comment on Hacker News

I also learned that many people believe that eBay doesn’t have much interest in preventing fraud on small sellers.

“Ebay consumes sellers as a raw material as part of the process.” Same comment as above on Hacker News

“I used to work at eBay Trust and Safety. The place is a nightmare and will not improve. … This kind of fraud sticks out like a sore thumb in click stream. I had no trouble finding fraud and building algorithms to automatically detect it but I did find it impossible finding someone at eBay who cared enough to do anything about it. eBay still gets paid so no one wants to be in charge of a revenue hit. I doubt that’s changed.” A different comment on Hacker News

Thanks to that public reaction I got a very polite call from eBay today  informing me that it would reverse the outcome of my case and issue a refund.

What should be done?

I am writing to the Illinois Attorney General’s Consumer Fraud Unit to ask them to investigate. Obviously the chances to catching up with Vadim Grebenyk are slim to none, but I am hoping to convince them to attack this problem upstream.

I also hope that eBay is genuinely interested in looking after small sellers and that we are not as disposable as this process made me feel.

So, eBay, if you are still reading, I have some suggestions.

What am going to do with the money?

Was it worth the time and frustration to get back $400? Not really. To prove to myself that I don’t care about the money I am going to take the money eBay refunds to me and donate it to Doctors Without Borders.