Getty Images has filed a competition law complaint against Google

I have some initial thoughts as follows:

Google’s rationale for image search in general is that displaying the image is necessary for the user to assess how well the image corresponds to their search. This practice has been litigated at least twice in the U.S. in relation to thumbnail images and has easily passed the test of fair use.

Getty’s complaint is directed more specifically to the creation of high-resolution galleries. Although Google could make a similar argument that you need to see the image in high resolution to properly evaluate it, my view is that this argument is not nearly so compelling. The high resolution display is more expressive and less informational and the potential adverse effect on the copyright owner is greater for that reason and because, as Getty points out once consumers see an image on the Web, they aren’t likely to go to the source and look at it again. Getty argues that Google Images’ creation of high-res galleries of copyrighted content is thus impacting Getty’s own image licensing business; promoting piracy and copyright infringement; and bolstering Google’s monopoly over site traffic, engagement data and ad spend.

[Update: It is worth noting that other design changes may have reduced the flow on traffic from Google Image search see this 2013 Search Engine Land story]

Basically, Getty is worried that it is far too easy to right-click and copy image from Google Image Search and that as a result people won’t click down to Getty’s now site. 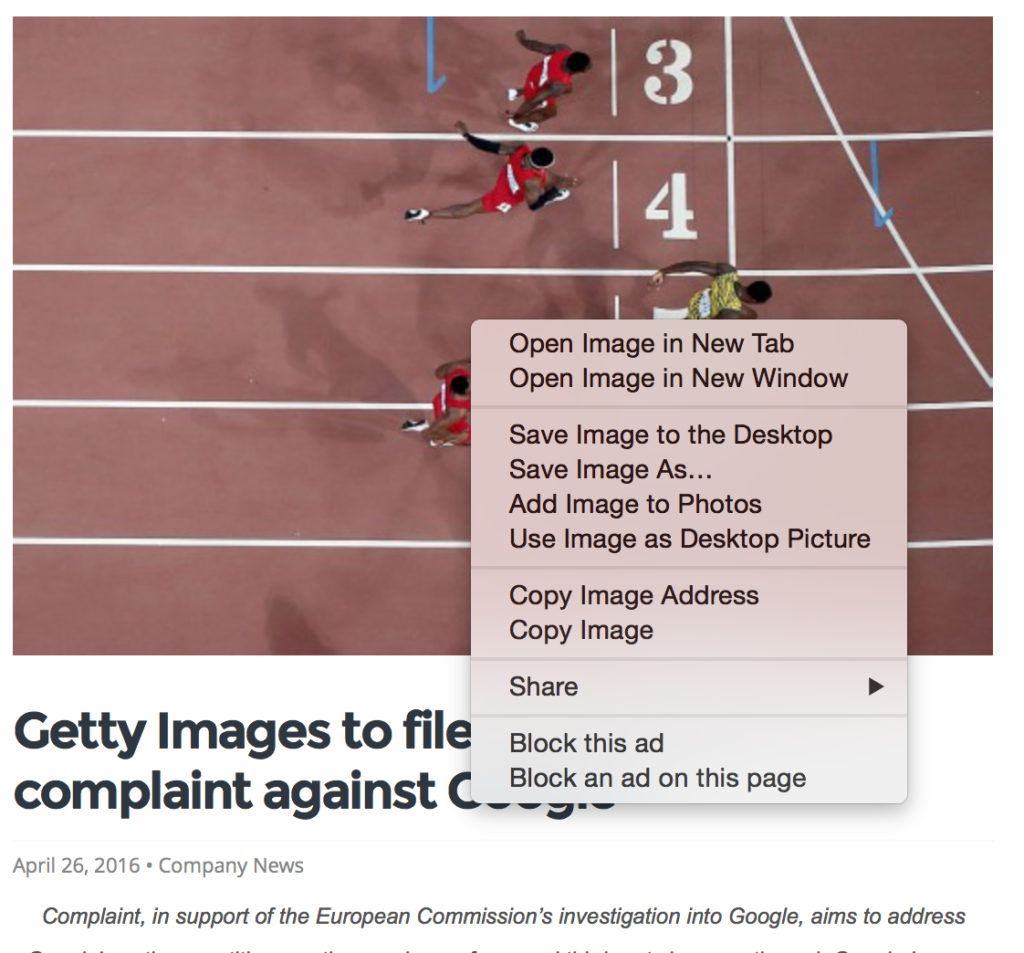 Is there a copyright case?

Getty is an American company complaining about another American company’s treatment of its copyrighted properties and so it is less than obvious that the complaint would be dealt with in the EU under antitrust law rather than in the US under copyright law. I would need to understand the technology behind the high resolution image display to say whether Getty has a strong case for copyright infringement under U.S. law, but I think there are clear differences between the fair use status of low-resolution thumbnails and the high resolution images available on Google image search today.

Is there a competition law case?

It seems to me that providing high resolution galleries makes it at least marginally less likely that users will click through to the original site. This in turn makes it marginally more likely that users will copy and paste without authorization. But I would note that Google is under no obligation to design its information services in a way that drives traffic to a particular website, or external websites in general. The design of Google image search would make a poor antitrust case in the US but it might go further in the EU because they take a broader view of “abuse of dominance”. The main problem I see is that even if Google image search increases the unauthorized use of images, it probably does not affect the market for licensed images. I think that people looking to license stock footage will go to stock photo sites, but this is an empirical question so we would need to look at how the market actually works.

Getty Images says that, when it first raised concerns about this with Google, it was told to accept Google’s presenting of images in high-res format or opt out of image search. Since its founding, Google has relied on the fact that people can opt out of search to address complaints about the way search is run. Participation in Google image search is voluntary – on an opt out basis – but that does not give Getty, or anyone else, the right to say exactly how they would like the search engine to run. In 2013 Google agreed with the FTC to make changes to the way it scrapes the content of rivals like Yelp. Sites like Yelp can now opt out of having their content scraped without opting out of search entirely. This is probably what Getty is looking for. But the issue for Getty is that it does not compete with Google they way Yelp does, so their case is not as strong.

It’s hard to say how might EU regulators will view Getty’s complaint. It depends on some facts that we don’t have access to at the moment — I have only seen the press release, not the complaint itself. It also depends on whether the EU case against Google has more to do with politics and protectionism than it does with the merits of competition law. If Google settles with the European commission, the settlement might include modifications to the way image search works and that would be a significant win for Getty. From Google’s point of view the worst case scenario is that it would be forced to make a change to image display within the EU. I don’t think Google will change image search in the US unless it thought Getty had a case under American copyright or antitrust law.