Skip to content
The U.S. Supreme Court will soon hear arguments in the case of American Broadcasting Companies, Inc. v. Aereo, Inc. (13-461) on the issue of whether a company “publicly performs” a copyrighted television program when it retransmits a broadcast of that program to thousands of paid subscribers over the Internet. This is an important case with far reaching implications for digital video recorders, cloud computing and the sale of movies and music online. It is also, unfortunately a case focused on exactly the wrong issue.
Aereo is just one of a long sequence of technologies that have raised conflicts between the interests of content owners and technology companies. Aereo offers the consumer the ability to watch live tv over the internet with the ability to pause, rewind and fast-forward programming.
Aereo provides this service by receiving free to air tv signals on a vast array of micro-antennae. Each antenna is dedicated to an individual subscriber. The tv signals so received are reduced to individual copies of individual programs. These copies are then transmitted to the subscribers.
The Second Circuit held that Aereo’s system did not implicate the copyright owners’ public performance rights under the Copyright Act because each transmission was from a single fixed copy to a single end-user. On the Second Circuit’s view, although Aereo’s system may transmit any given program to a large number of end-users (N), it is best understood as N one-to-one transmissions, not one one-to-N transmission.
A number of broadcasters including the titular plaintiff, American Broadcasting Companies, Inc., argue that the Second Circuit’s understanding of the “transmit clause” –  part of the definition of the public performance right under the Copyright Act – is flawed. The Broadcasters proposed a reading of the act that would render any transmission, from any source, a public performance if it is capable of being received by a sufficient number of persons.
The broadcaster’s preferred reading of the Copyright Act would overturn the Second Circuit’s decision in Cablevision, a case involving a remote digital video recorder (R-DVR).
Cablevision should not be overturned: (1) The broadcaster’s preferred reading of the Copyright Act is incorrect as a matter of legislative history and statutory construction.
(2) The policy concerns raised by the broadcasters and some commenters are misguided. (3) The legality of the Aereo system should turn on the application of the fair use doctrine Aereo’s internet tv service, an issue that the Supreme Court has not been briefed on, but will surely get a full airing in the Second Circuit if the Supreme Court affirms the decision currently under review.
I have added some pictures below that flesh out some of my tentative thoughts on this subject. 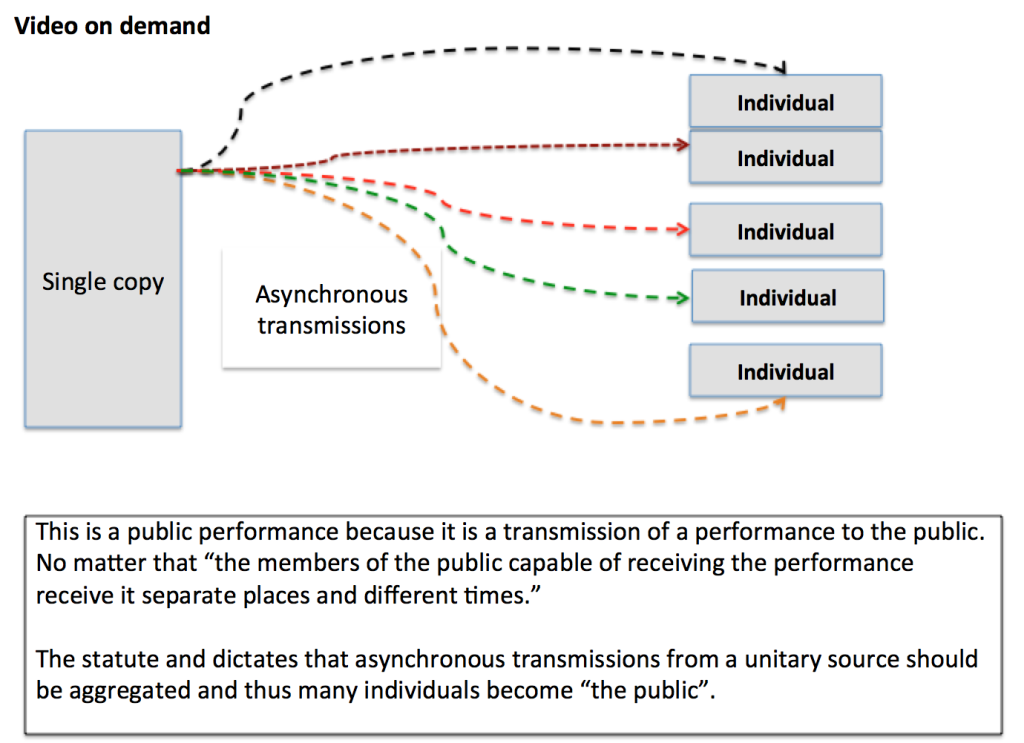 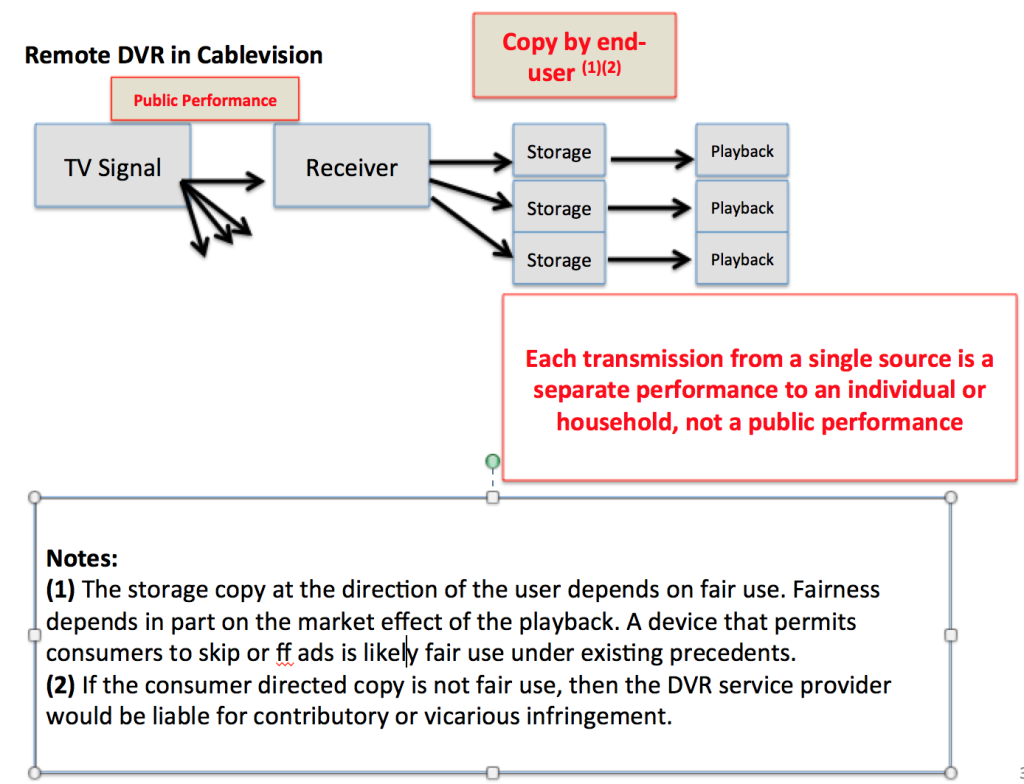 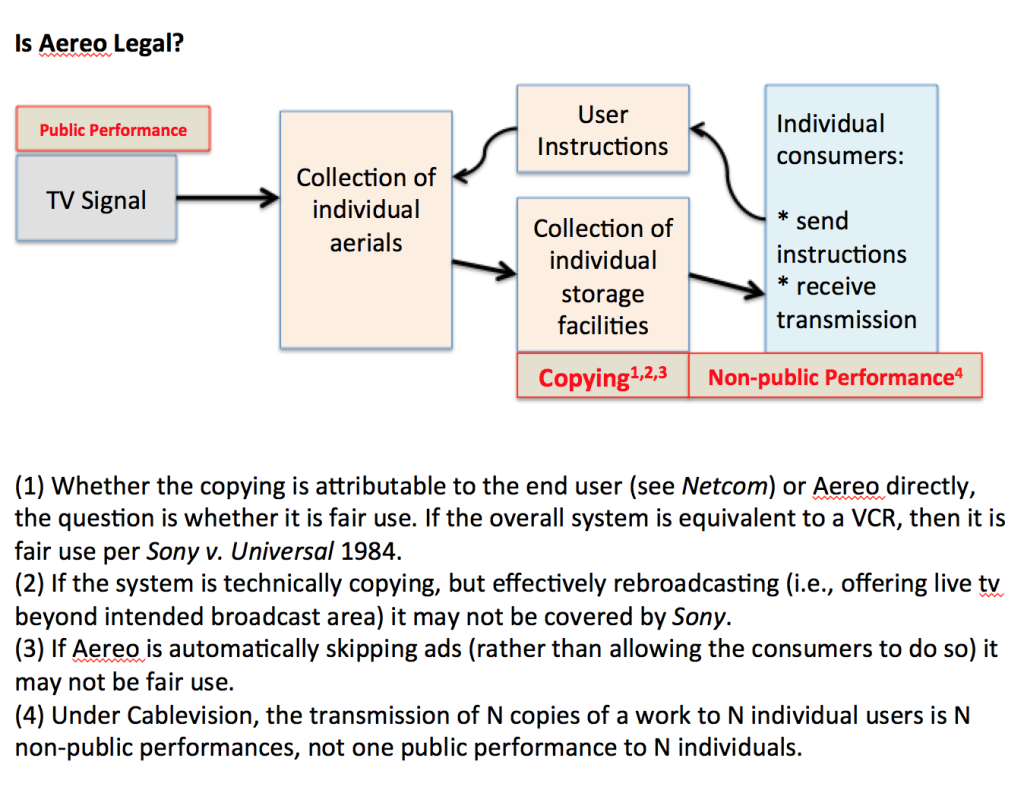 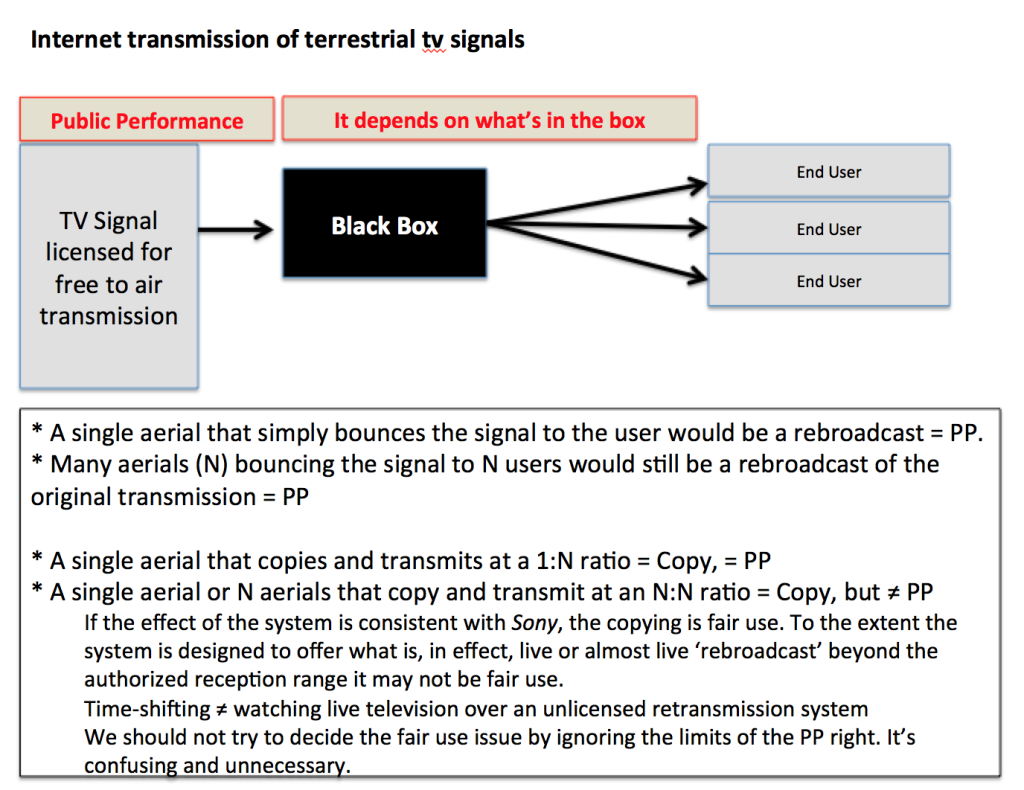