This is the second  in a series of posts discussing the 2015 Update to the data in my forthcoming article, IP Litigation in United States District Courts: 1994 to 2014 (Iowa Law Review, forthcoming 2016). You can read the 2015 Update in serial form in the posts that follow, or you can download the entire update as a pdf file from ssrn.com. See Suggested citation, Matthew Sag, IP Litigation in United States District Courts—2015 Update (January 5, 2016). Available at SSRN: http://ssrn.com/abstract=2711326.

The previous post discussed the overall state of copyright, patent and trademark litigation, this post addresses the new data on copyright litigation and the John Doe phenomenon.

Figure 2 (above), shows how the dramatic increase in copyright litigation from 2010 to 2015 is almost exclusively attributable to litigation against anonymous Internet file sharers. The figure shows the number of copyright cases including (dashed red line) and excluding (solid red line) cases filed against John Doe defendants. As discussed in Copyright Trolling, An Empirical Study, and IP Litigation in United States District Courts: 1994 to 2014, the rise of Internet filesharing has transformed copyright litigation in the United States. Federal district courts are currently inundated with copyright owner lawsuits against “John Doe” or “unknown” or otherwise unidentified defendants. Figure 3 (below) tracks the occurrence of these John Doe lawsuits from 1994 through 2015. These John Doe lawsuits are almost exclusively related to allegations of illegal filesharing, which explains why they were virtually non-existent prior to 2004. 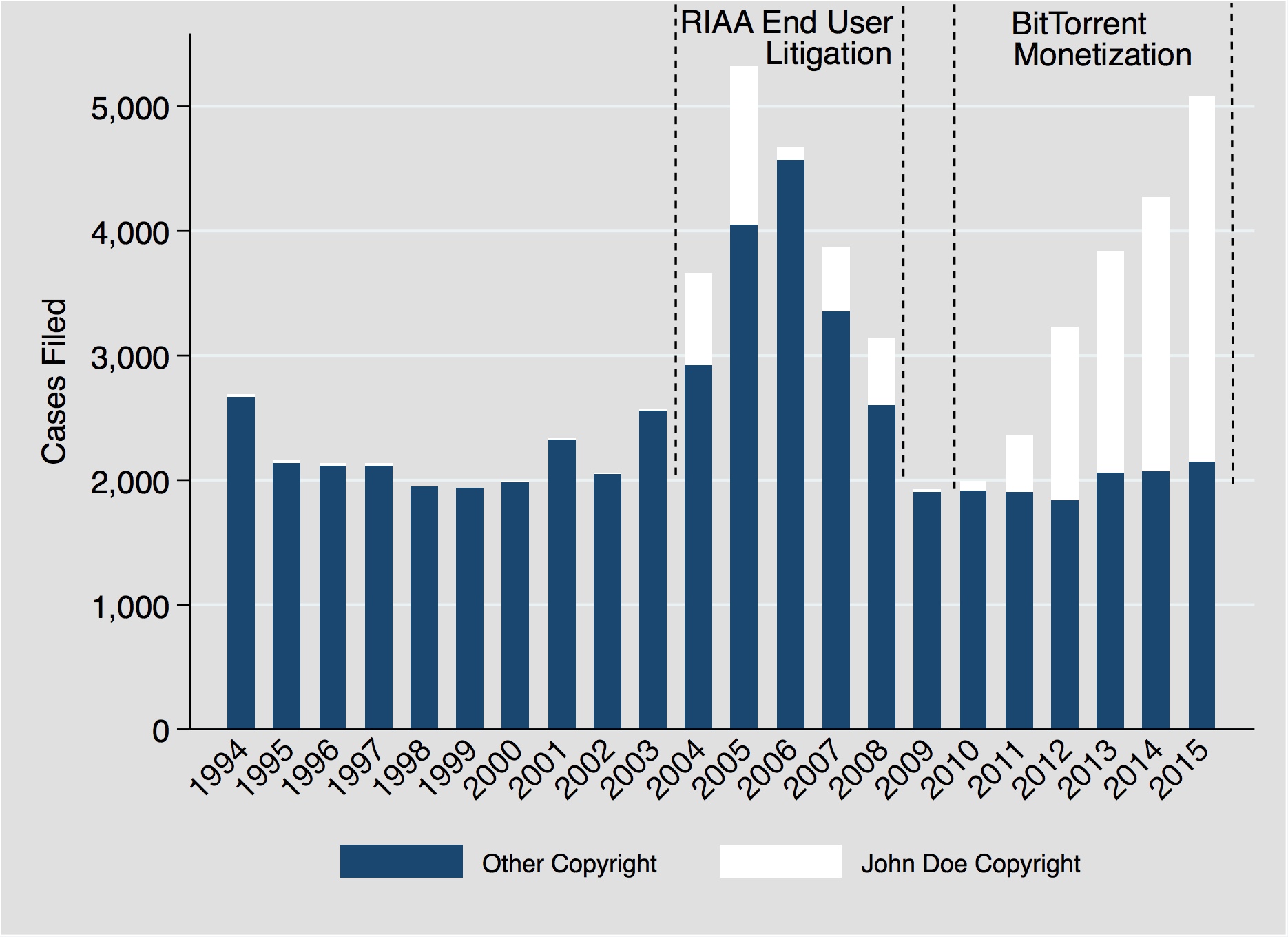 John Doe litigation has not been a static phenomenon. The current era of BitTorrent monetization began in 2010 with a handful of cases filed against large numbers—sometimes more than 5000—IP addresses. Filing suits in this way enabled plaintiffs to economize on filing fees but courts have become significantly more skeptical of the legality and desirability of mass joinder in BitTorrent cases. Based on the data from 2015, it seems that the era of mass joinder is almost completely over. As seen in Table 2 (below), in 2010 the average number of John Doe defendants per suit was over 560; by 2014 it was just over 3 and in 2015 it was barely over 2. As Table 2 also shows, although pornography still dominates John Doe litigation, the phenomenon is becoming increasingly mainstream.

John Doe and pornography cases identified by the author. In 2015 John Doe litigation made up almost 58% of the federal copyright docket (2930 cases out of 5076). One of the most interesting aspects of this phenomenon is that it is driven by such a small number of plaintiffs and— based on my random sampling of the underlying complaints—an even smaller number of lawyers.

Table 3 shows the five most prolific John Doe litigants for each year from 2011 to 2015. In 2015 Malibu Media was still the most significant individual copyright plaintiff in the US; in fact, it filed more suits than ever last year. However, Malibu Media accounted for a smaller percentage of copyright lawsuits in 2015 because other plaintiffs also ramped up their efforts. Malibu Media accounted for 41.5% of all copyright suits in the US in 2014, and just over 39% in 2015. Malibu Media is represented by Michael Keith Lipscomb of Lipscomb, Eisenberg & Baker, PL. Lipscomb also represents two of the other plaintiffs on the top five list for last year—Manny Film and Plastic The Movie Limited—as well as two of the top five from 2014—Good Man Productions, Inc. and Poplar Oaks, Inc. The filing fee for opening civil action in US district courts is now $400, so that means that plaintiffs associated with Mr Lipscomb have paid at least $936,800 in filing fees over the last year. Given the scale of this enterprise it seems reasonable to infer that Lipscomb and his clients have found a way to effectively monetize online infringement. 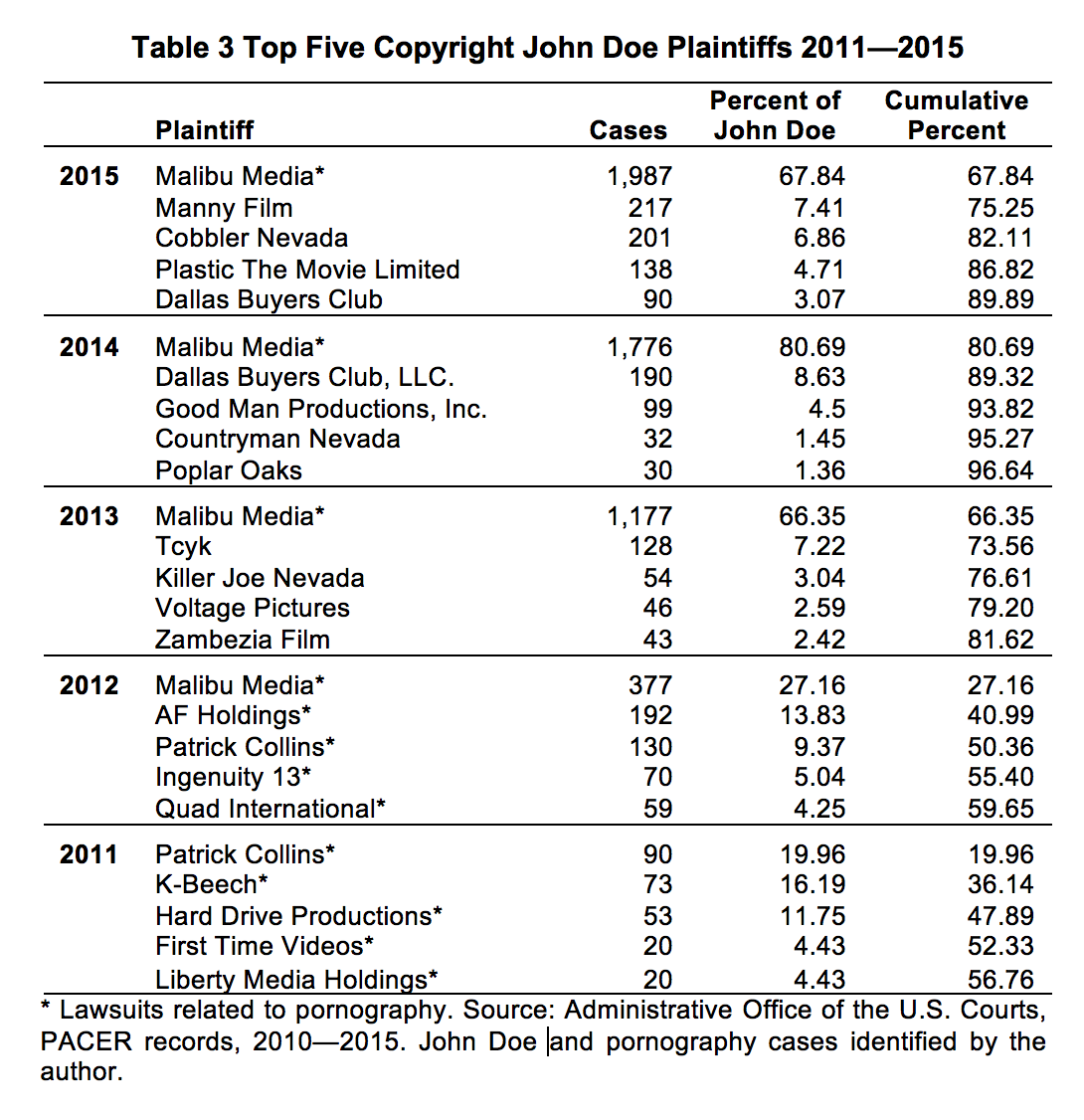