Compared to patent trolls, copyright trolls have received comparatively little attention. Admittedly, patent trolls may have broader economic significance, but copyright trolling raises its own unique set of issues that deserve to be addressed. Defining exactly what makes an individual or an organization a troll is inevitably controversial. As initially invoked, the term was meant to be a disparaging caricature. However, over the years, the term patent troll has come to mean something more than merely “someone whose lawsuit is inconvenient to me,” although it is certainly still invoked in that way from time to time.

The paradigmatic patent troll is a nonpracticing entity who asserts patent infringement against companies who have clearly not copied its technology and seeks either (a) to extract a series of nuisance value settlements or (b) to extract a large settlement from a deep pocket (eBay, Microsoft, etc) that is entirely out of proportion with the contribution on the patented technology. This latter approach has become significantly more difficult after the Supreme Court’s decision in eBay.

The nature of copyright trolling is a reflection of the economics on statutory damages and the principal technologies of infringement. The Electronic Frontier Foundation defines a copyright troll as a person or organization that files a copyright infringement lawsuit against as many defendants as possible for the purposes of extracting the most settlements with the least court costs. Generally these suits take the form of “Copyright Owner v. John Does 1 –1000” or some other large number. Not all of these suits are related to pornography, but a very large number of them are.

The theory behind these multi-party John Doe lawsuits is that every participant in a BitTorrent swarm is engaged in an act of copyright infringement and that each persistent is jointly liable for the resulting infringement. Courts and commentators have formed the distinct impression that such lawsuits are never intended to go to trial – they are simply a mechanism to compel Internet service companies to give the plaintiffs names and addresses to match the IP addresses that they already have. With this information in hand, the plaintiff can negotiate hundreds, even thousands of settlements. Reports indicate that $3000 is a typical settlement figure. This is a lot to pay for an adult movie, but it’s a small fraction of the potential statutory damages for willful copyright infringement which could be as high as $150,000 per work infringed. The threat of statutory damages, and the threat of exposure and embarrassment drive many settlements.

Just how widespread is this practice? I examined all copyright cases filed in the federal district courts associated with the Second, Seventh and Ninth circuits between January 1, 2001 and August 31, 2013. I identified “John Doe” lawsuits by looking for those words in the case title and I differentiated pornography copyright trolls from other plaintiffs by reviewing at least one underlying complaint per plaintiff. Figure 1, below, breaks the filing data down by state and into three year time periods based on the year of filing, beginning with the year 2001. This figure shows the prevalence of all “John Doe” actions as a percentage of all copyright filings. The figure highlights the recent growth of “John Doe” lawsuits and their uneven geographic concentration. It’s particularly noteworthy that in 2013 the suits make up the majority of filings in Illinois, Indiana, Washington and Wisconsin. 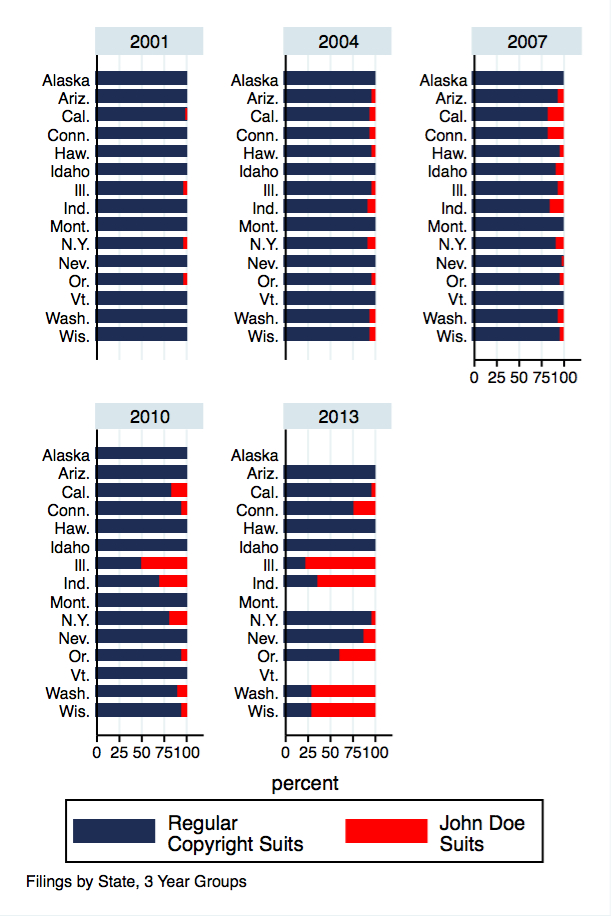 Figure 3, below, is similar to figure 2 except that it focuses in on the last four years. The previous figures illustrate the prevalence of John Doe lawsuits as a percentage of all copyright lawsuits.

Figure 4, below, shows the more numbers for John Doe pornography and other John Doe copyright litigation.

I have not examined the data from district courts beyond the second, seventh and ninth circuits, but for the moment it appears that the Northern District of Illinois can be proud to be the pornography copyright trolling capital of the United States.