The Second Circuit just handed down its decision in Authors Guild v. Google. The court, Judges Level, Cabranes and BD Parker, ruled that Denny Chin (sitting by designation as the United States District Court for the Southern District of New York) was “premature” in certifying the plaintiff class. Before certifying the class, the court below should have class certification made a determination on the merits of Google’s “fair use” defense.

Accordingly, the June 11, 2012 order certifying the class was vacated and remand. 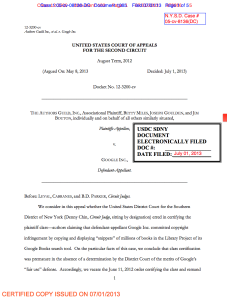 My first reaction is that this is huge win for Google and for the broad coalition of groups who think that library digitization for particular purposes (text mining, search engines, access for the visually impaired) is fair use.

My second reaction is that I think the Second Circuit is trying to tee things up so that they can decide the fair use issue in Authors Guild v. Google and Authors Guild v. Hathitrust all at once.